﻿﻿ Hanging out with those who inspired a generation! – Martyn Sibley
prednisone online www.canadaonpharm.com
Reasons Why You Should Buy Antibiotics Online from www.antibioticsonlinerx.com/ Over recent years, buying drugs online has become a popular tendency because it is a simple process that does not require too much time or effort. In this regard, nowadays many people also prefer to buy antibiotics online as it is a useful alternative to buying them at traditional land-based pharmacies. Obviously, the reasons why people are attracted by online shopping are numerous as it will be examined further. However, this process is not only easy and free from any inconveniences but may also be risky especially if you cannot differentiate an illegal drugstore from a legal pharmacy. This way, before you actually buy antibiotics online, it is worth considering the pros and cons of online pharmacies in order to make the right choice. Be that as it may, buying antibiotics at online drugstores is getting more and more popular with customers worldwide and not without a sound reason. Read on to learn the details.

On Saturday 30th August 2014, exactly two years to the day since ParalympicGB won its first medals during London 2012, I was lucky enough to visit Queen Elizabeth Park in Stratford for National Paralympic Day 2014.

A celebration of all things Paralympic, this annual festival saw the stars of London 2012 returning to the stadiums to compete once again, and in the case of the races in the London Aquatics Centre, take part in the first international swimming competition that the centre has seen since London 2012.

Hosted by HRH The Earl of Wessex and the Deputy Mayor of London Munira Mirza, sport wasn’t the only event on the menu at the Olympic Park, as the Liberty Festival, an annual showcase of the work of Deaf and disabled artists, was also in full swing. With stalls, performances and live events, including street theatre, dance and music, taking place throughout the park, it was impossible not to feel the thrill of the Paralympics reverberating around East London once again.

First up for me though was a visit to the Aquatics Centre to watch Paralympic swimming star and London 2012 gold medallist Jessica-Jane Applegate return to the waters, in a series of thrilling races which finally saw TeamGB triumph over the rest of the international competition! Jessica was also joined by Glasgow Commonwealth Games winners Jack Thomas and Steph Slater; making this a truly British affair, with so much Paralympic talent on show.

Following up a nail-biting time in the Aquatics Centre was never going to be easy, but an intense game of Boccia in the huge Copper Box Arena managed to deliver the goods. Pitching TeamGB against our arch-rivals Greece, the game was neck-and-neck right from the very beginning, but much to the annoyance of the crowd, Greece managed to take the game in the final moments, which means the rivalry will be even more intense next year! 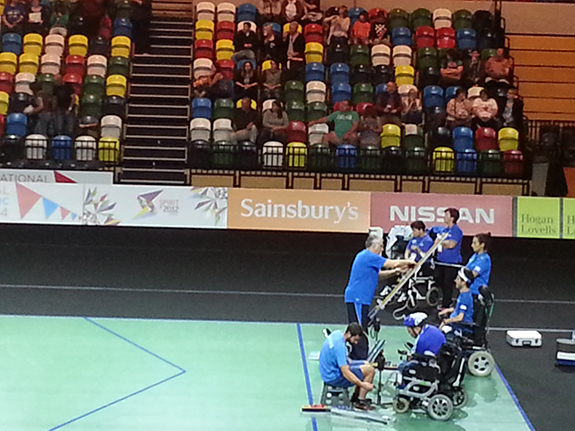 After watching all of nerve-wracking matches, it was great to get back out into the fresh air of the Olympic Park to watch some performance art and listen to some great music played by the likes of Ren Harvieu and Jez Colborne and Mind the Gap. The whole park was alive with Olympic spirit and the entire event was a great reminder of the power of the Paralympic games and the positive spirit that it encapsulated.

As well as exploring everything that the Liberty Festival had to offer, we were also able to try out a range of Paralympics sports for ourselves. Everything from wheelchair basketball to boccia and inclusive cycling was on offer, and there were also a lot of activities for kids, aiming to get them excited and interested in accessible sport. Autograph hunters also got the chance to hang out with some of their favourite Paralympic stars, including Jonnie Peacock and Stef Reid.

All in all, this was a great way to end the summer and served as an excellent reminder of how inclusive and accessible Great Britain can be when it puts its mind to it.

This site uses Akismet to reduce spam. Learn how your comment data is processed.

My name is Martyn Sibley. I am a regular guy who happens to have a disability called Spinal Muscular Atrophy (SMA). This means I cannot walk, lift anything heavier than a book or shower myself. Nonetheless I run Disability Horizons, am the author of 'Everything is Possible', I have a Degree in Economics & a Masters in Marketing. I love adventure travels (including an epic visit to Australia), I have great people in my life (including my soul mate), I drive my own adapted car, run my own business, have flown a plane, enjoyed skiing & SCUBA diving, and live independently on earth.

This error message is only visible to WordPress admins